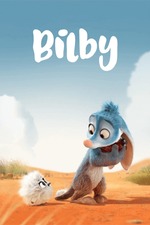 I cannot nor will not deny both the beauty of Bilby's animation, as well as the cuteness of its characters. Both of these are positive qualities to have. I just wish there was more to Bilby than those two things.

It's a really simple conflict/resolution story which has the majority of its runtime taken up by its titular character being miserable or in pain. I'd even go as far as to say the film is mostly just a montage of unpleasant situations in which Bilby takes care of his bird friend. That's fine in concept if there was downtime for characterization or even just letting the film happen at a neutral or God forbid positive pace, for a short while even. And yes, that all comes with the resolution of the film but it all feels kind of unearned from a storytelling standpoint. I like the expressiveness of these characters, I love the dangerous and gorgeous world they live in (though an American film poking fun at the dangers of the Australian outback is a bit tired in my opinion), so to only see that in the context of conflict feels awfully rushed and not all that fun.

A slower more relaxed tone would have done the film more favors. It is beautiful, it is adorable, but beyond that it's unfortunately a bit hollow. But at the very least a cute set of characters serve to warm my heart the slightest bit, especially Bilby himself. Empty cuteness is still pretty damn cute.