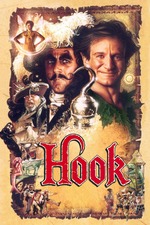 'Hook' is one of those love it or hate it films, personally I was very much charmed by this movie. Upon first hearing of it as a child, I was actually confused and annoyed by the idea of Peter Pan – the boy who never grew up – growing up. It seemed a very depressing notion. But I underestimated Steven Spielberg and his own rich imagination for this story. I believe the film’s real question is not, “What if Peter Pan grew up?” but “Can you be a better adult with the upbeat heart of a child?” Spielberg’s answer: yes… and that’s okay!

Peter Banning (Robin Williams) is a workaholic corporate lawyer who’s become distant from his family. Peter, his wife Moira (Caroline Goodall) and the children pay a visit to their grandmother, Wendy Darling (Maggie Smith). While their parents attend the opening of a children's hospital in Wendy's name, the children are taken away by a malevolent force, and Banning receives a letter from Captain Hook (Dustin Hoffman) demanding his presence at Neverland. Wendy reveals that Banning, who has forgotten his entire childhood, is in fact Peter Pan. He is visited by Tinkerbell (Julia Roberts) who insists he is Peter Pan and whisks him away to Neverland. Peter awakens there and discovers that Hook is holding his kids hostage in order to duel Peter Pan one last time. In Pan’s absence, the Lost Boys have gained a new leader, the cocky and brash Rufio (Dante Basco). While the Lost Boys reluctantly train Peter to become the Pan again, Hook and Smee (Bob Hoskins) plot to make the children love the Captain as their father.

The actors all instill a sense of fun in the picture. Williams captures the cynicism and vulnerability of Banning and the childlike energy and courage of Peter Pan. Dame Smith brings an incredible gravitas and sweetness to the role of Wendy. Although, Roberts is rather too cutsey as Tink and the delivery of some of her lines is quite wooden. Hoffman is simply a blast as Hook, chewing the scenery in pantomime fashion, as well as a sense of sinister cunning. Hoskins is possibly my favourite live-action Smee – he’s affably bumbling and has the funniest lines and reactions to Hoffman’s antics, and the duo always steal the show. Basco was a badass as Rufio, and the other Lost Boys are enjoyably mischievous, funny and credible, with a few exceptions that come off as a bit wooden or brattish.

The score by John Williams is one of his finest ever, famously soaring to epic heights filled with triumphant horns and heart-warming flute and piano movements, even weaving mystery and sinister cues around Captain Hook. The cinematography by Dean Cundey is gorgeous, invoking the bright and warm colour palette of the Disney film and the imaginative quality of Neverland. The matte paintings are incredibly detailed and colourful, holding up better than a great many recent digitally-generated backgrounds. It’s often said that Neverland, for all its intricate design, does feel staged and theatrical. And yet, I feel that’s part of the charm, invoking the theatre tradition of J.M. Barrie's story. We don’t see much of Neverland apart from the Lost Boy’s hideout, the pirate town, and the Jolly Roger, so it can seem quite limited. Elsewhere, the flight scenes with Williams hold up surprisingly well; I can believe he truly is flying. When it comes to the action, it is played up in an exuberant if childish fashion, but it still keeps that vital levity until Pan squares off against Hook one last time.

There are a lot of fun and clever visual references to the Disney animated movie as well as the J.M. Barrie novel and stage play. I found myself enjoying the various references to the Barrie classic, including a jokey use of clapping to revive fairies, the idea that Neverland is fuelled by the imagination of children, and the famous phrase "to live will be an awfully big adventure". There is a romantic element between Peter Pan and Tinkerbell, building up on the strong affection between their novel counterparts, but it seems to amount to little beyond mere reference. Hook’s phobia of ticking clocks mirrors the fear of his inevitable demise or “the ticking clock” symbolising death. Despite his efforts to stave off mortality, Hook meets his end with an unfulfilled life, while Peter abandons immortality in Neverland for a life of growing old with his family, choosing to live to the fullest. I also admire Peter's character development: at first he has no interest in his children, denying them their childhood fantasies, showing well as how removed he is from his own childhood. Before he can save the children from the very real danger that is Hook, he has to reconnect with his deeply buried sense of heroism and adventure, and is a more complete person for doing so because he embraces both the past and the future rather than shunning one or the other.

Sometimes, the script is a tad corny and childish, especially with an old Tootles searching around the house saying that he’s "lost his marbles". It’s also pretty bizarre to see such 90s affectations as skateboarding and basketball in the Lost Boys’ lair, dating the movie. At time it can get very cheesy, especially when Peter and the Lost Boys trade insults and later defeat the pirates with simple slapstick. I also found the Lost Boy Thudbutt being the subject of many “fat” jokes to be a tad obnoxious. The film also begs the question: how did Hook capture Jack and Maggie? How did Smee get hold of Peter’s medical records and learn about the children’s misgivings towards their father? How is Peter able to remember his thoughts from when he was a baby? It all goes unexplained, and that is quite detrimental to a lot of viewers who may want something more logical.

If you’re the sort of person who cannot stand such glaring plot holes in addition to the layers of cheese, this won’t be for you. Clichés and plot holes notwitstanding, the actors carry the story, the effects have their charm, the action and comedy is a lot of fun, and there’s enough reverence for the source material to please fans of the book and the Disney film. 'Hook' is a very fun movie and I hope future fans of the Peter Pan myth find much to enjoy in this tale, forgiving some seriously corny moments.