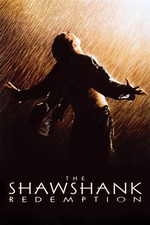 Get busy living, or get busy dying.

As was to be expected, massive tonal whiplash to go from Mars of Destruction to this, but a gladly welcomed case of that happening, made for a very fun afternoon. It's now become customary in CCCC that, whenever a movie buffers for too long, to pause the film and help let it load a little bit, we throw on that video of a donkey getting run over by a train. We had to play that video so many damn times during this that the donkey effectively became a co-star of Shawshank. (The warden says something to Andy at one point about "feeling like you got fucked by a train," so the donkey also became the visual representation of that.) So, as for the movie, can I really say anything about this one? I want to say that everyone has seen it, but likely the biggest gift of rewatching this today was that my friend Brad who selected this for our viewing had, in fact, never seen The Shawshank Redemption. Considering for me and I'm sure it's the case for so many others, where this film has always felt like permanent piece of everyone's cinema lexicon, it was really cool to get to watch it with someone who didn't have that. Some movies simply hit just about all of the right notes where it can feel redundant to call it "great," Shawshank just happens to be one of them. Freeman and Robbins are fantastic, Bob Gunton and Clancy Brown are also I feel often really underrated in how good they are as the film's antagonists, but I think since I've been one to get "Shawshanked" when this movie would play on TV, which it does all the time, I always connect the most to James Whitmore as Brooks. It's an utterly heartbreaking performance, and if there is one notable aspect to Shawshank that I would want to remotely call "undervalued," it's how much it works as an essential piece for prison reform, if not outright abolition. Too much focus on the punishment and not enough on rehabilitation, where even if the latter word gets mentioned, it's just a mouth piece that offers little actual work going towards that. How devastating must it be to have your humanity so broken down that a cell is the only place you can truly feel like you belong to? Yes, it's a word that itself has been beaten into the ground beyond its truest meaning for most, but you gotta have "hope." Hope is not the solution to our woes, yet it is often always the building block, the foundation for the best things in the world. It's this desire, this drive to be better, to escape, and to flourish beyond all odds. The world can be a whirlwind of shit, but it doesn't have to be. Crawl through the shit, bring yourself out to the rain, and you'll be a legend for those who knew you and those who will be born long after you are in the ground. Not "the greatest movie of all-time" as it's been displayed as on IMDb for I don't know how long, but I'll be damned if it isn't still "great."