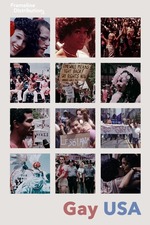 WE ARE YOUR CHILDREN

My MUBI trial lasts for one more week, so going to capitalize on it as much as I can over at least the next two days. Starting with their current movie of the day, Gay USA is another installment in the kind of rare documentary that I am coming to like a lot. No talking heads, no after the fact commentating about the events you're seeing. Instead, Gay USA is filmed over the course of one day during a Pride Parade in San Francisco in the 70's. We see the festivities, the attendees, and we get to see and hear in the moment thoughts with members of the community, their allies, and their adversaries alike. The phrase uttered the most throughout the feature, just using different language from person to person, can mainly be quoted as "If one group is oppressed, then we are all oppressed." I couldn't agree more. It's interesting seeing individuals from the time talk about the push for civil rights, even beyond gay rights, in a manner that feels like it's going parallel with talking points of modern protests. Have we made progress especially in the department of LGBTQ+ rights? Absolutely, that's undeniable. Is there still more that can be done? You bet. We shouldn't have to fight to be who we are, but if a fight is needed, then keep on keeping on. March onward, interlock arms, wear your heels, and speak your truth. The law of the land is not religion, it's the Constitution. "We hold these truths to be self-evident, that all men are created equal, that they are endowed by their Creator with certain unalienable Rights, that among these are Life, Liberty and the pursuit of Happiness." More than worth a look as a time capsule, and it would make for a good double feature with The Times of Harvey Milk.