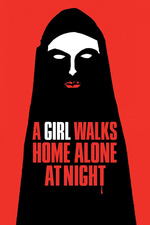 Wow, this was a lot to unpack. Sometimes you watch a film from a first-time director, and it's clear they're not sure if they'll ever get another shot...it's just ALL up there on screen, everything they want to say. AGWHAAN (I'm not typing the whole title every time) is a film that feels like Ana Lily Amirpour will probably never be able to live up to again. She may make a better film, but she'll never make a film that's MORE film.

The core concept would appear to be a subversion of the typical scary situation for a young woman, where this woman actually is the one who should be feared...because she's a vampire. However, we don't even start there. We actually enter on the depiction of this rundown Iranian town, a nowheresville living off the blood of the land (oil) while it's populace just wastes away. Perhaps our vampiric hero is the spirit of the town itself. But before we get to her, we enter on a sort of Iranian James Dean rockabilly dude who's got a sweet classic American car and a heroin-addicted father. Soon after, his life intersects with the vampire girl's and many other residents of the town in a way that feels like a subversion of the manic pixie dream girl story into a shout of feminist rebellion. I can't say this film personally resonated with me or was particularly scary, but it sure is an original and dynamic debut...

For the Real Cinephiles:

As interesting as the film was, the overall issues I had with it are the same I have with a lot of "slow cinema". Essentially, there are just story elements that are not of great interest to the writer, and fall apart if you bother to look twice at them. And there are shots that are positively glacial, of interest to the director, but abusive of the time and attention of an audience. Frankly, some people are not going to be interested enough to follow the tenuous story here, and/or will get bored stiff.

For example, a key plot point is our emo-sensitive dream guy, Arash, stealing a cat from a backyard in the first scene. Why is he stealing this cat? What is he even doing hanging out there? Who knows, never explained. But that cat becomes the connective tissue that holds this plot together. I forgot all about it until it became important because there are actually a lot of great performances here. The initial flashiest performance is from Dominic Rains as the drug dealer who intimidates Arash and his father and steals his car. But as the film develops, Arash himself comes into his own, and there is time to shine for all the characters, from his father and the neighborhood prostitute to a neighborhood kid and Arash's spoiled rich girl boss's daughter.

Of course, Sheila Vand as the titular "girl" has the most weight on her, but also the least to do. She hardly speaks, and is often quite vague when she does, a kind of strong silent type who, like Batman, seems more at home in her nighttime vigilantism than in the polite mask she puts on to socialize. Writer/director Amirpour is partially deaf, and Vand seems to be a stand in for her, speaking more through actions than words. She manages to say a lot with her eyes and posture though, delivering at times a gripping performance simply in the way she slightly cranes her neck when Arash approaches behind her. It's an intimate scene set to the song "Death" by White Lies, a tense and romantic piece of hipster iconography that is so achingly slow it teeters on the verge of comedy. The absolute highlight of the film, and a showcase of everything Amirpour wants to say.

Those influences are all together in that scene, but pop up throughout the film, from the soundtrack choices to the stark, graphic novel inspired imagery, this whole thing is almost more a tone poem than a narrative. Skateboarding, drugged up dancing, ironic costume parties, and self-empowered prostitutes... I suspect this film will hit hard with some third-wave feminists. The Girl is a classic 'vampire with a conscience', her Chador (like an open-faced Burka) weaponized into a sort of vigilante-like costume she wears while turning patriarchal oppression back on Islamic men. She's not above threatening even little boys, scaring them into growing up to fear and respect women. There's a sense that even an emo-sensitive dream guy like Arash would suddenly get his neck torn out if he made one wrong move...

While many of the characters in this town intersect, giving The Girl (she's never named) a chance to be defined by her interactions, it's ultimately the burgeoning connection between her and Arash that carries the narrative forward. We're meant to hope for them to have a kind of Bonnie & Clyde or Rebel Without A Cause romance on the run, though it's anything but certain that they will. The narrative simply doesn't give us enough background or development of either of them, particularly The Girl, to know if there's any chance of this working. It honestly doesn't spend a lot of time on this, instead using the screen time to dwell on the quiet moments of The Girl stalking potential prey: men who would use their position in society to take advantage of women. The theme of the film is more an indictment of patriarchy, particularly in Iran and the Middle East (it had to be filmed in California as a stand in) than it is a love story or a thriller.

Still, there's certainly enough here for those who are interested in stories of female empowerment beyond simply gender-flipped Hollywood remakes and female-led Rom-Coms. The narrative here may not lead to satisfaction, but if you're liking the vibe of the first 15 minutes, then there's a lot to sink your teeth into with this one. ;)