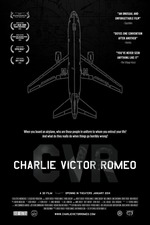 Charlie Victor Romeo is a 1999 play by the Collective: Unconscious theatre group that has now been adapted into a feature film. Or more properly, we should say that it has been “transcribed” onto film; there is no attempt to expand on the stagebound, black-box origins of the piece, and this refusal to create a more obviously cinematic atmosphere is just one part of CVR’s conceptual project. The subject matter that comprises Charlie Victor Romeo is widely available to anyone who cares to discover it. This, too, is part of the overall structure of its intervention as both a performance work and an experimental documentary. In succession, with no overarching narrative or interstitial connective material, CVR features a rotating troupe of players reenacting the final moments in the cockpit before six separate airplane crashes. The dialogue and actions are taken from the cockpit voice recorders (“CVR,” which is translated into NATO alphabet code for the title), which were recovered following each disaster. In essence, we are watching as airline crews work to stave off probable or certain death. Or, to be more precise, we are watching actors turn these real-life events into a form of docudrama.

Continued at the source.

Not Michael is using Letterboxd to share film reviews and lists with friends. Join here.