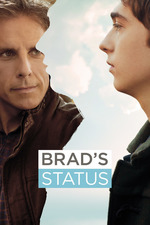 Brad Sloan (Ben Stiller), the hero of Mike White’s Brad’s Status, is a prig of the first water, which should be apparent to anyone not already a part, as he is, of the cozy little world of the media, "non-profits" (and especially the non-profit media), academe and Hollywood. But like many if not most prigs, he secretly envies those he so looks down on for getting the girl, the fame, and the money that he wants (or thinks he wants) as much as they do. There are many potentially interesting directions to go in with a story like this, but it is the single most uninteresting one which is taken by Brad’s Status. That is the one in which (spoiler alert!) the prig is reformed, softened, purged of envy and made holy again in his pursuit of political purity.

Worse, this transformation is effected by contact with youthful beauty and idealism, or what passes for it in the movies. We’ve been here before, of course. Youth worship was all the rage when I was a youth too. It wasn’t even original then. It had all happened before in the 1920s. But just as we didn’t know anything about that in the 1960s, so the youth worshippers of today in their 40s and 50s aren’t old enough to remember the sixties. Seen now from the other side of what we used to call "the generation gap," the youth cult looks a little different. In fact, it looks utterly absurd. And now it’s the Gen-Xers who envy and admire the idealism of their juniors are on course for ending up like so many of their sixties-era predecessors: sad hippie wannabes who never grow up.

The movie is at its best early on when playing Brad’s status envy for laughs. It begins with a funny scene in bed as Brad, unable to sleep, quizzes his sleepy and bewildered wife, Melanie (Jenna Fischer) about what she can expect to inherit when her parents die. She says they will leave it all to their grandchildren, which Brad thinks monstrously unfair, as her brother has three children and they only have one. Or, she says, they may leave it to charity. "That would be mean!" says Brad, the manager of a non-profit. "I feel like we’re running out of time," he adds. "Talk to your parents; get some clarity."

Melanie replies: "I love you. Please shut up."

But his inner voice won’t be silenced, and he returns to thoughts of Chris Kanew (Adam Capriolo), his only employee who has just told him that he’s leaving the non-profit world for finance. He feels, he has told Brad, that he "can do so much more good by making a lot of money and giving it away than by asking other people for money. Do you know what I mean?" Brad knows what he means. The words strike a chord with him because he has lately been made aware, as part of a gathering mid-life crisis, of the success of four of his college friends — success which he cannot but take as a personal reproach to himself.

Nick (Mr White) is a gay Hollywood director whose house has been featured in Architectural Digest; Jason (Luke Wilson) is a hedge fund manager and philanthropist with an attractive family and a private jet; Billy (Jemaine Clement) is a tech billionaire who has retired to Maui with two bikini-clad lovelies, and Craig (Michael Sheen) is a best selling author and TV political pundit. "It’s stupid to compare lives," says Brad in voiceover, "but when I do I feel that somehow I have failed." The feeling is both expressed and exacerbated when he confesses to his teenage son, Troy (Austin Abrams) whom he is escorting eastwards (they live in Sacramento) to look at colleges, that he is still ashamed at having only been wait-listed at Yale 30 years earlier.

The film is punctuated with voiceover complaints similar to the above — to the point where the joke begins to wear a bit thin, to say the least of it. We might almost begin to think that we are meant to take Brad’s laments about how unfair life is, not to mention Brad himself, seriously. What, for example, are we to make of this little beauty? "For them [the envied ones] the world isn’t a battlefield, it’s a playground. It’s heaven," he observes to himself as he looks out of an airplane’s windows at sunlit clouds. Or: "In college I was in love with the world and the world was in love with me. When did we fall out of love?" When he finds that he wasn’t invited to Nick’s [gay] wedding he moans, "I was off the list. The world hated me and the feeling was mutual."

Surely such stuff must be intended as satire? And yet Brad is never allowed to look quite so ridiculous as these and similar thoughts ought to make him. His bitter envy is made to appear instead as a harmless foible, deserving only of the most gentle sort of correction, which is what it gets after expressing itself in less invidious form as joy at hearing that his high school guidance counselor thinks Troy may be "Harvard material." He immediately begins fantasizing about the belated and vicarious success that must one day be his through his brilliant son — until, at the height of his absurdity, he begins envying Troy’s imaginary success as he already envies that of his friends, adjusting his fantasy, then, in the opposite direction and imagining the boy as a penniless busker on the streets of Cambridge, Mass. Anyway, he says to Troy, how is he to afford the tuition to Harvard? "Maybe it won’t be a big deal. Maybe one of your grandparents will die."

Troy meets a high school friend, Ananya (Shazi Raja), who is already an undergraduate at Harvard, and he and his father have dinner with her. When Brad later meets her alone, he confides in her his envy of his more successful friends and echoes Chris Kanew’s words about doing more good by making lots of money as the advice he would now give to his younger self. This prompts her to rebuke him for thinking only of his own discomfort at dinner parties with people more successful than he is instead of the starving poor in India (where her family is from) who don’t have any dinner. Citing Brad’s "white privilege," she says: "Don’t ask me to feel sorry for you. You’re doing fine. You have enough."

And, lo, Brad sees that he does have enough! Even though her youthful idealism with a Third World vibe barely masks her abysmal ignorance of the world and of any but a predictably ideological understanding of history, it strikes poor dumb Brad as it is meant to strike us, with the force of revelation. Her self-righteousness helps to reawaken his own, which is then further jolted into life by an abortive dinner with Craig — the one of the four old friends who also teaches a course at Harvard and who has been instrumental in getting Troy an interview with a professor he particularly wants to study with — but who now chiefly wants to retail malicious gossip about the other three.

Long filled with a mordant envy for this academic celebrity who mouths liberal platitudes on TV, Brad now finds his admiration curdling into contempt. Seen from outside, however, both feelings appear equally unwarranted and reveal an essential pettiness that he’s too wrapped up in his self-comparisons to others to see. Instead, he transfers all his fawning admiration to Ananya and her equally attractive Korean friend Maya (Luisa Lee) as they perform as the soloists in a Dvorak "Humoresque" arranged for violin, flute and orchestra. "The music was beautiful," says Brad’s ever-loving voiceover; "the girls were beautiful. I could love them without ever possessing them. Just like I could love the world without ever possessing it."

Oh, please! This is a reference back to an earlier voiceover — you may begin to feel, as I did, a bit claustrophobic in the echoing labyrinth of Brad’s brain — in which he had mournfully noted that "I suddenly felt a deep grief for all the women I would never love and all the lives I would never live" — during which his fantasy of Billy’s life on Maui had been adjusted to replace Billy with himself and the bikini girls with Ananya and Maya. It ought to have been funny. At least sort of funny. But somehow, perhaps because we could see Brad’s ultimate, rather forlorn acceptance of his beta status coming a long way off, it wasn’t. Only, like him, rather pathetic.