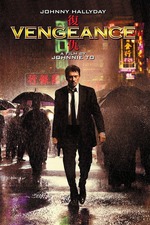 Johnnie To's multilingual near-masterpiece follows a gnomish, trenchcoated hitman-turned-restaurateur (craggy Johnny Hallyday) who hires a trio of Cantonese assassins (including Anthony Wong and To's very own Victor McLaglen, Suet Lam) to find the men who killed his daughter's family. For all of the love that To and his indefatigable screenwriter Wai Ka-Fai have for the mechanics of genre, their characters are individuals instead of merely types, and as such they occupy the frame instead of merely moving through it; these characters struggle as a group towards a shared goal while dealing with struggles of their own (often consciences--or, in Hallyday's case, identity) that the other members of the group are incapable of helping them with and the group, in turn, buckles and resettles under the weight of individual pressures. So while the basic plot of VENGEANCE is, as the title suggests, simple revenge, the film concerns itself less with Hallyday's plan (hire some men, kill some men) and more with the way the characters' actions (and reactions) silently affect the people around them--a dynamic that gets its finest workout in a roughly fifteen-minute chunk of the film set in a wooded park, where the protagonists encounter a group of rival hitmen out on a picnic with their families.

Not Ignatiy is using Letterboxd to share film reviews and lists with friends. Join here.