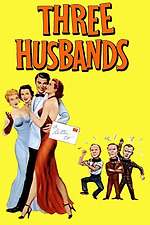 A genially bizarre kinda-sorta-but-not-really sequel to A LETTER TO THREE WIVES, made independently and released through a different studio, with no cast members in common, but sharing the (gender-flipped) conceit of spouses receiving letters stating that their better halves have been unfaithful, with the writer's eager participation. Co-scripter Vera Caspary also wrote the adaptation for ALTTW.

All similarities end there, however, as our pot-stirring protagonist turns out to be narrating from the great beyond, represented by the same twinkling-stars-on-black velvet-with-voiceover backdrop found in the boomlet of films about angels and/or the recently deceased made around this time (IT'S A WONDERFUL LIFE, ANGEL ON MY SHOULDER, FOR HEAVEN'S SAKE, etc.) Puzzlingly, having lured you into expecting something fantasy-adjacent, the movie largely drops this angle pretty much immediately. Absolutely everything that happens afterward makes perfect sense without the celestial buildup, morphing into a highly uneven but amiable comedy.

Whatever other merits it does or doesn't have, THREE HUSBANDS gives Eve Arden what nearly amounts to a leading role, which fact alone makes this worth your time. This is more brassy, raucous Eve  than wised-up, sharpest-tack-in-the-room Eve, but as always, Eve in any form is cause for celebration, and she gets a couple of setpieces here that she makes more out of than anyone else could. Her husband's the bumptious Howard da Silva, an inspired pairing that more could've been done with.

The dead man is played by, of all people, playwright/actor Emlyn Williams, of THE CORN IS GREEN renown, in his one and only movie made outside of the UK. (He's billed over Arden, a far bigger US name, in the credits and on the one-sheet.) I have no idea how he ended up here, since this, on its own, doesn't seem sufficient reason to cross the Atlantic. In any case, he lends a certain black-comedic, James Mason-ish flair otherwise wholly absent, and between that and Arden firing on all cylinders, this is worth a watch.

The Man in Black

The Man Who Cheated Himself