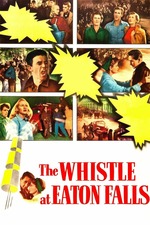 The Whistle at Eaton Falls

Fascinating to see a major studio movie from the early 50s dealing so fully and multi-dimensionally with union and labor issues. This begins with the same 'docu-drama with heavy emphasis on the docu', just-the-facts approach as producer Louis de Rochemont's other releases, quickly becoming something much more character-driven and warmly human in tone. Siodmak employs his usual noir touches and framing as the story darkens, but the small-town setting also lets him channel his inner Clarence Brown, so to speak, and it makes you wish he'd gotten a few more opportunities to do so. It's good to see Bridges get a real leading man role, plus the rarely glimpsed-in-sound Dorothy Gish. A shame that her later appearances were as rare as her sister's were prolific. Also, without giving anything away,  it's genuinely surprising to see something from 1951 treating The Great Enemy, television, as a positive plot point.

Let's Do It Again