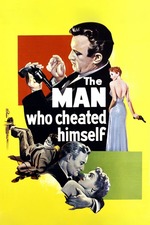 The Man Who Cheated Himself

Trim, relentlessly suspense-building noir with a bit of a twist in its setup, giving three sometimes underutilized performers a real chance to shine. A rare leading man role for Lee J. Cobb, and a romantic one to boot. (Well, romantic in the extremely noir sense of 'I'm helping my married girlfriend cover up the murder and dispense with the bullet-riddled corpse of the husband she just killed, even as I investigate the case', but still...) For at least part of the running time, Lee J. pulls off the neat trick of making this man semi-sympathetic while going around lying and gaslighting left and right.

Jane Wyatt plays the hard-edged murderess as if she's exorcising, with every line, all the saintly  sweethearts and perfect wives she'd played to that point and would play again. She's clearly having a great time being bad, and it's a joy to watch. John Dall, fresh off GUN CRAZY, brings some of that same slightly off-kilter energy to working the right side of the law, in his final lead in a Hollywood film.

As a side note, the set design/architecture and decoration in the downstairs area of Dall's home is fascinatingly weird. It's most visible about 52 minutes in.