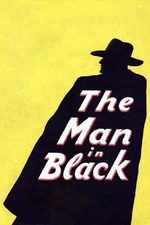 The Man in Black

Movie version of a popular BBC radio show, with the eponymous gentleman sepulchrally narrating the oft-told tale of an imperiled heiress being energetically (and unsubtly) gaslit by assorted greedy relations. You've seen every  bit of this in other films, but in this genre, familiarity usually breeds fondness, and that holds true here.

If you love old-time radio suspense/supernatural shows (or not-so-old, if you've put in quality time listening to BBC 4), and/or melodramas set spiritually, if not always actually, in the Victorian era, this will be just Your Sort of Thing. Played in the correct penny-dreadful register by a cast of mostly unknown actors. The biggest name is Sid James of Carry On fame. I particularly enjoyed Anthony Forwood as the designated Young Rotter. Valentine Dyall reprises his radio role as the MIB.

If this makes you want more, there are only 4 episodes of the original show known to exist, which the Beeb has released commercially, presumably to atone for their complete destruction of the rest of the run, while still turning a profit. Their Fear on Four show from the 1980s was an unofficial revival, and is findable online. And there's a recent version with Mark Gattis as The Man, to be found at your preferred audio retailer.