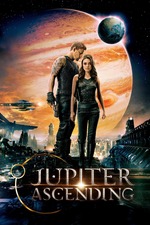 Eddie Redmayne...what in the actual fuck was that? Literally one of the worst performances I have ever seen from a talented actor.

Channing Tatum is someone I don't think is a great actor but he is charismatic as fuck. However, in this they kind of sapped him of his charisma and he just seemed bland.

I also hated the score for this. The film was so serious and the score at times came across as cheesy and lazy. The score needed to match these tense action scenes and it didn't deliver.

Now for the good. I thought the pacing was solid. Yes, it dragged in places but for a 2+ hour runtime, it held my attention for nearly the whole thing, which surprised me.

Anybody who reads my reviews knows I am a total sucker for world building and there is something really special with this world here, even if they probably over-complicate things they shouldn't.

Even though there was an over-reliance on CGI, at least it was done very nicely and that made for some very cool-looking shots in the film as well as some well-done action sequences. The scene with the aliens chasing Jupiter and Caine through the city was very well done.

Overall, this could and should have been better, but it's hardly an atrocity. I have an appreciation for it but I don't know if I would bring myself to watch it again.