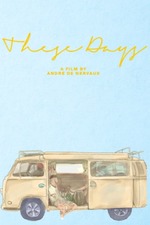 Just listened to my album, “These Days” all the way through for the first time in over a year. It’s clear to me that the themes of the album are pretty obscure to anyone who didn’t make it, so if ya wanna know boom here it is:

I hoped to capture what I felt about the nature of memory — how its clouded by time — how small mundane pieces of life can become hugely influencial to a person’s memories.

I wanted to highlight how banal “the present” can feel — so I decided to comprise the album almost entirely of loops — incredibly simple themes in each song repeated over and over again. I wanted to evoke a feeling of fragmentation, kind of like a weird scratched up record — using jarring sounds/textures without distracting from the narrators. Here’s a couple things I thought worked:

Layered all kinds of sounds that felt like they could be diegetic.

Made lil sound effects that would pan from side to side.

Put in really loud moments so the whole song would have to be played softly in the movie.

Put the most exciting parts of the music low in the mix or distorted.

Some decisions were really hard to make. I would write something I felt was really pretty and then have to bury it under layers of sound because it didn’t feel representative of how “the present” works — to try to represent how the beauty amongst everyday trivialities so often goes unnoticed until it is remembered.

I hoped the album would compliment the movie but make people question “why is that sound there” if they listened to it on its own.

The bonus track “Like a Child” is the only exception. It’s dedicated to my friend Emily. I recorded it years before the rest of the album in a practice room in the music building that I’d sneak into between classes when I was in college. I was having an awful day and set my phone down while I played. I don’t remember why I was upset and I never thought I would use the recording. But I decided to put it on this album because it was a nostalgic reminder to myself that These Days will become Those days.

And now they have.

It’s been two years since These Days came out.

I already long for the parts of my life that this movie has. At this moment I cannot dance in groups at a bar, I cannot watch 1x7 by Andre de Nervaux, I can never make another film or even have another conversation with Eli Hayes. My life is different now. And Those Days are committed only to my memory.

For that reason I’m not sure that I’ll ever be a part of a project more personal to me than this one. Andre was magnanimous to me while I was making the music — letting me push the deadline back — and back again — and back further. I couldn’t have done it without him, I couldn’t be prouder to work with him and to have made this.

In the moment I rarely know what’s important, meeting a new person, going on a walk, listening to a song for the first time, I have vivid memories of events like this that were entirely unimportant to me at the time — usually because I was focused on something else.

I really dont remember a lot of the things that have ruled my life, but I remember these “unimportant” things. And so I’m convinced that quotidian moments will one day be the most special moments to me, especially because of how unspecial they are now.