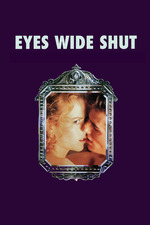 Where to even start here? Kubrick's greatest and most abstract work, moving from easy concepts into the labyrinthine and back again, showing you how they're connected. The Cruise-Kidman dynamic seems initially only a minor facet to the film, or a gateway to what turns out to be a work on perception, shattered perception, and dream logic - making it innately, almost incalculably cinematic. But we circle back by the end - everything comes back around to ultimately the relationship between two people.

This is a stylistic, schematic and structural masterwork of the highest order, thematically moving from the primal to the perceptional to the conceptual to the wholly abstract and finally to the emotional. The inital dichotomy between Kidman's innate, primal sexuality and her casual, domestic routines set up the films principle questions - as always, being essentially truth and illusion - and of course the casual admission of sexual thoughts of another partner sets up Cruise's psychological breakdown and the films narrative drive. But what's surprising is the films schematism - cold and sensual at once - a question or a reaction from one sequence becomes the driving force into the next one, yet as though contradictory, the film seems less the "present" and closer to early-20th Century European modernism - which should be unsurprising given the source material, but it serves to detach the film from conventional realism even moreso...and morseo than ever for Kubrick.

The pivotal sequence, obviously, is the orgy section - where the film defies readings and becomes sense experience. It's "unsexy" but yet continues the initial dichotomy Kidman announces with her body in the films opening shot, distinctly linking eros with abstraction. Kubrick's directorial choices begin to mimic this conceptual drive, where masks and objects take on affects which will re-appear in different ways within the narrative, as though being reminded in life of something which you once saw in a dream. I was astonished by one of the last moments within this section which reminded me of Eisenstein's notes on psychological affect (and this entire sequence indeed resembles Eisenstein's Ivan pictures) - where the last moment we see Mandy alive, a man in a penguin mask enters frame - but the penguin's nose looks less a nose and more a scythe, so our senses direct us towards images of Middle Ages images of reaping the dead. We do not know yet that Mandy will die - we will learn that much later in an unusually expository sequence with Sydney Pollack (forgive me - this films single flaw....maybe this part could have been cut?) yet we perceive it immediately through the penguin mask.

If Kubrick always was more respected in contemporary (or, well, North American) circles as opposed to say, an Eisenstein, it's probably because he's virtually apolitical, even in his anti-war pictures. Not that it matters much here - perception and the destruction of perception are its own story. The film at times almost becomes about formal devices - there's probably an argument somewhere that this film is about the relationship between eroticism and art. As soon as Cruise's "perception" over his relationship with Kidman is shattered, the films devices follow Cruise's breakdown formally without ever necessarily entering his subjectivity, so we can both watch Cruise's behaviour but also perceive this breakdown of "the real" via heightened colour tones, primary colours and sounds, as though the film separates them for us, allowing us to see the singular abstraction of each property in and of itself. This culminates with the orgy sequence but as mentioned before, circles back...all the way to the primal - so much so that the films last word is "fuck."

The films last conversation is perhaps representational towards Kubrick's intentions between the viewer and the film: "Maybe I think we should be grateful. Grateful that we've managed to survive through all of our...adventures. Whether they were real, or only a dream." "Are you sure of that?"....."Only as sure as I am that the reality of one night, let alone that of a whole lifetime, can ever be the whole truth." But while we have circled back here - even if we have learned more - it remains that this is not a film about cinema, but about a relationship. "And no dream is ever, just a dream." Perhaps it works both ways, but by circling back we're reminded about the honest truths in this movie as well - at times I was reminded of how people can laugh at movies when it's being totally sincere - mostly because of the sincerity itself, and how it can make us uncomfortable at how close to home it hits. This is cinema, but it's also life - a relationship can break down, and build itself back up - and everything you learned in-between makes all the difference. You come back, and you both see the world in a completely new way.

But anyways - what is there left to say? A pretty significant amount, and far from my current capabilities certainly.