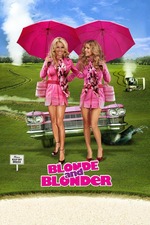 This film has a 16% Rotten Tomatoes rating and a 2.8/10 on IMBD, which just goes to show most people in the world DON'T KNOW HOW TO HAVE FUN.

I'm not trying to say this is a lost classic or even a particularly great movie but it's a perfectly competent goofball comedy in which Pamela Anderson and Denise Richards play Dee and Dawn, a pair of hapless blondes who get mistaken for underworld assassins. They're pursued across Canada by an array of gangsters, FBI agents and, of course, the real assassins - a pair of leather-clad kung fu goths named Kit and Cat. There's a farting turtle, a lot of misunderstanding and some very bad dance moves, which is more or less what any sane, rational person would expect/want from a movie called Blonde and Blonder. Who are all these people watching it and expecting to get The Godfather?

Richards and Anderson are by no means gifted with comic timing but they do a decent enough job and quite a few of the gags land in one piece (e.g. in the casino : "I just won a million dollars in chips!" / "A million dollars in chips? Wow, I hope you're hungry!"). The script itself - which takes on the classic long-haul chase format - felt a little awkwardly structured at times because it flits from one group of chasers/chasees to another, but I do enjoy that style of plot and it all came together in the end, in a broadly satisfactory way. It's a story, it's coherent, it's fun. Great.

Oddly, this was directed by Bob Clark (the last film he made before his untimely demise), although he wasn't able to get a credit due to his Canadian citizenship expiring. But the fact that it's a Bob Clark movie should give you an idea that it's at least vaguely competent. Anyone who genuinely thinks this is bottom of the barrel cinema has barely even taking the lid off the barrel, quite frankly.

I dunno. It's a good time. The gags fly thick and fast and I had least a dozen proper laughs out of it. I miss this kind of deeply silly, innocent kind of humour that no one seems to do any more. I miss jokes. Bring back jokes. Put Blonde and Blonder Blu-Ray. Let's move to a better, brighter future together. LET'S LEARN HOW TO HAVE FUN and rate this at least a 7/10 on IMDB. Do it in the name of JOY.