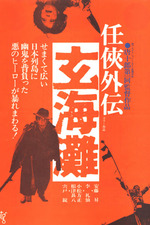 Superb, unconventional Yakuza drama starring Noboru Ando and Jo Shishido as sworn brothers with an incredibly dark past , who are currently engaged in people smuggling and the exploitation of Korean immigrants. Jinpachi Nezu is the thoughtful underling and Reisen Ri is the stowaway who upsets the apple cart.

This was a tough watch, it goes to some VERY dark places and contains more than a few really difficult scenes (as well as some gruesome ones) that seem to conflict with the films somewhat 'light' tone early on. It soon becomes apparent though that any levity is intentional and is used to great effect in making the Sawaki gang even more thoroughly deplorable (Jo himself delivers his scummiest role ever).
As flashbacks are explained and the story progresses it gradually becomes even more tragic and heartbreaking in what is actually quite a scathing indictment of the treatment of Koreans by the Japanese and ends up delivering a powerful message, even if it's delivered in a somewhat unconventional way.

The entire cast are excellent across the board, but it's Reisen Ri who steals the show with a very demanding (emotionally and physically) performance. Overall, I'm really quite blown away by this one, and I think it's one that will definitely leave a lasting impression, but it's definitely not a film that I'd recommend to just anyone.