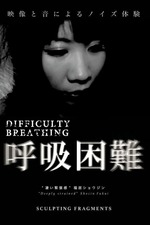 I am scared, terrified. Few films frighten me, yet this shook me to the core. I wanted to stop, I wanted to stop watching this because I did not merely watch this film, but I became a part of it. Whenever our lead clenched her hand, I found myself clenching mine. Whenever she started eating, I found myself chewing on thin air; I have been hypnotised, and I still am in a trance, long after watching. It could have been minutes since this finished, it could very well have been hours as well. It is not that time passes slowly, it doesn’t pass at all. ‘Difficulty Breathing’ is less a film than a nightmare, one that I am unconvinced that I have woke up from. Three times I paused this, three times I paused and ran to the bathroom, feeling like I needed to vomit, not because of anything graphic, but because I felt lost, disoriented. Atmospheric does not even begin to describe this experience, watching our protagonist lose grip with reality at an accelerating rate, I cannot help but lose grip myself. By the end, I was no longer simply glaring at a screen, I was sweating, shredding my nails with my teeth. Difficulty breathing? no, I wasn’t breathing at all. I am baffled, confused, puzzled, but more than anything, I am f**king terrified. My insides have turned outward, I am shaking, and have been for however long time it has been since this started. There is hardly a line of dialogue in here, and those few lines are in unsubtitled Japanese, but I could hear the silent pleads for life and the cries, begging for sanity. This has shaken me, and I am unsure whether any film has traumatised me this much. I know one thing for the same, I will never be the same. I have witnessed something, something indescribable. I feel like I am going to wake up any second now, and realise that I have not been thrust into an unforgettable experience, and realise that I have not just written this review, but that this is all a dream. Yet I don’t want to forget this, I don’t want this to slip my mind. I want to remember every noise, every image. This is a brilliant work of art, something unrivalled in how it has managed to horrify me. This is pure concentrated genius, and I am still dazed by the sheer power of it.