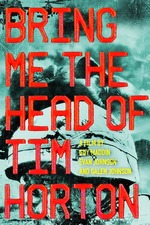 My capsule review from my TIFF Wavelengths coverage for MUBI:

War Epic Fail -- Just over half an hour, so really neither a feature or a short, this highly improbable effort by Maddin and Co. has been relegated to a flatscreen in the lobby of the TIFF Bell Lightbox Theatre. By the same token, its inclusion in the festival at all is nothing short of a miracle, the sort of avant-garde infiltration that we will probably look back on years from now with equal parts wry amusement and awe, not unlike Duchamp's urinal. Ostensibly a behind-the-scenes look at the production of Paul Gross' medium-budget Canadian war film Hyena Road -- a Gala Presentation at this very festival -- Tim Horton is in fact a deconstruction of the very idea of the First World war movie, not to mention the very act of military adventurism Hyena Road is intended to valorize.

Inseparable from this project is the fact that for Paul Gross, best known to American audiences as the creator-star of the sitcom "Due South," Hyena Road is yet another part of his ongoing project of redeeming Canadian masculinity, something that Maddin and many others believe really doesn't need saving. As evidenced by his curling-based underdog sports comedy Men With Brooms, his Canadians-fight-WWI epic Passchendaele, and now Hyena Road (about Canadian troops in Afghanistan), Gross' definition of national pride seems to be based on terms established by Americans.

Whether or not Canadians could ever "measure up" is beside the point; Tim Horton wonders aloud, quite hilariously, whether they should. When Maddin, playing the bitter, under-funded art director baking in the Jordanian sun, refers to Gross as the "Great Canadian Populist," he is both telling a certain ugly truth and spitting the words out with delicious irony. This is the most Damon Packard-like film Maddin has ever made. The fact that the role of Spielberg is being played by Paul Gross kind of speaks for itself.