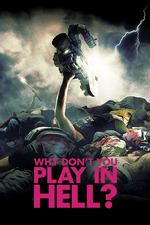 Sono embraces his inner Tarantino as he pays tribute to grindhouse cinema, yakuza movies and 35mm as the greatest format of them all.

I'll be honest, this was a very conflicting viewing experience. For each obnoxious "whoosh!" transition, poor attempt at humor, and cringeworthy character, I got twice the fun with awesomely staged scenes, bonkers fun and that tiny little girl from the commercial should apply to join Babymetal cause she's equally cute and pulled off the badass.

There is no doubt that the filmmaking in every Sono movie is creative and awesome, he has a way of coming up with wild ideas to put on display that will either annoy or shock you, but they won't leave you numb. The action set pieces, stunts, and bloodshed featured in this film are on par with those in Tarantino's films, if not even better. There's a way in which Quentin gets this look aesthetic, whereas Sion just goes for the raw. Either way, they were equally entertaining to watch.

As I mentioned above, I am among those who appreciate when cinematography and production design are combined to create a perfect composition that stands out and serves as a visual resource to enhance a film or inform the audience. The movie does an incredible job in this regard, with much of the best humor coming from small details that are brought out through these visual storytelling. Whether it be the huge portrait of one of the protagonists, the macabre dance of the girl in that dream scene or the entire third act.

The greatest problem with the film is that it was just too chaotic. The film never takes a pause and constantly throws information at you. This sometimes made it hard to follow the story, especially when it decided to follow a non-linear approach. Again, I never really sympathized with the leads because they were all incredibly annoying, except for Mitsuko who was a true badass. Is it just me, or is the idea of a Japanese Bruce Lee somewhat ironic considering the vast majority of the iconic actor's films had this strong anti-Japanese sentiment?

All in all, in terms of my enjoyment, the film came and went like the waves of the sea. As an ode to filmmaking it's uneven, as a comedy it's ok, but as a yakuza Tarantino film it's wonderful.

TODAY SCHEDULE
Mayerling
The Spy Who Loved Me
Cocktail
Why Don't You Play In Hell?