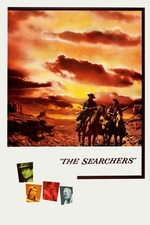 There's always an interesting question when you judge an older film: do you judge it by the standards of the time, or by current standards? In general, I try to keep the time in mind, but still be honest about my feelings about it. In that way I must say I understand the influence of The Searchers, but I simply don't feel it holds up anymore.

The film's story actually has quite a bit of promise. A racist former soldier and a part cherokee young man track down a band of comanche raiders who kidnapped a young girl. Unfortunately, the film meanders too much to really take advantage of this. While the film certainly doesn't agree with the main character's racism, it fails to really analyze it in any sort of meaningful way. As such, what could have been an interesting character study is instead simply a film with a somewhat unlikable lead.

Instead of looking at the characters, the film meanders on a lot of tangents. Most of these don't really seem to serve much of a purpose, as they don't inform the character or story at all. A couple of odd elements of comedy also lend to an unclear tone.

I absolutely understand why this film is so beloved. It is more morally ambiguous than most American films of the time, and the cinematography is absolutely breathtaking. In this day and age, though, it's hard to recommend as other films of the era have simply held up much better.