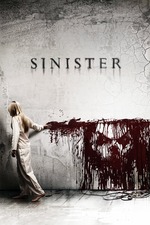 Sinister is something of a mixed bag. There's a lot of really good stuff in this film, but it's met by some really significant issues.

The best part about this film is the atmosphere. Director Scott Derrickson and Cinematographer Chris Norr make brilliant use of light, shadow and framing to constantly suggest a sense of menace. Negative space is used very well to suggest something else being in the shots, putting the viewer in a constant sense of anticipation and tension. The super 8 films that serve as a centerpiece are absolutely terrifying, using a sort of brilliant simplicity that immediately that immediately unnerves the viewer in a unique manner. Finally, Derrickson and C. Robert Cargill's screenplay wisely decides to slowly introduce its supernatural elements, keeping the fear going and going while developing a sense of inevitable doom.

The film starts to show its issues in its second half, though, as the supernatural elements become more overt. The first few "proven" supernatural moments are quick, simple and effectively creepy, but as the film goes on it begins to overplay its hand. Some of the most blatant sequences in this second half wind up being more funny than scary, and release the tension that had been so well set up. The other major issue is the decision to focus fully on Ethan Hawke's character. Though his performance is very strong, the sheer level of over-focus leaves his family feeling more like plot tools than people. This is especially disappointing since his family features significantly in the film's endgame, and though the idea of the ending is strong, their lack of focus saps much of the impact it could have had.

Sinister's brilliant setup still leaves it more good than bad, but it's ultimately somewhat a frustrating experience. A little more coyness and a stronger focus on the supporting cast could have made this a truly great modern horror film. As is it's a solid film, but somewhat of a missed opportunity