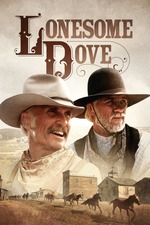 One of the greatest westerns of all time. Lonesome Dove effortlessly straddles the line between recreating and deconstructing the classic western. The tone and visuals perfectly evoke the old classics, while the twists and turns of the story expose a more realistic take, one where being good isn't enough to survive.

Augustus McCrae, played by Robert Duvall, may be the single greatest cowboy character ever created, a brilliant ranger and lawman who'd rather just drink and whore his way through old age. Tommy Lee Jones' Woodrow Call serves as a perfect counterpoint, expressing a deep emotional reservoir while barely showing any emotion. The rest of the cast is filled with then up-and-comers like Chris Cooper and Diane Lane, who give the supporting roles a life and depth beyond the occasionally stereotypical roles they play.

The story touches on many themes, including revenge, unrequited love and grief. Most importantly though, Lonesome Dove is about men who struggle to come to terms with their emotions, and the toll it takes on their lives. Larry McMurtry is something of an expert on this subject, having won an Oscar for the similarly themed Brokeback Mountain. It is equally as effective here, with the leads shown to be two sides of the same coin, broken men in an open world.