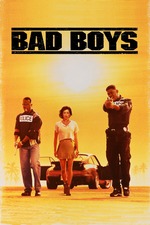 Bad Boys is painfully 90s and painfully Michael Bay in some of the worst ways.

Now, I have nothing against the 90s, or Michael Bay. However, this being Bay's first movie he hadn't quite figured out how to film an engaging action scene yet. When you strip that away and leave the rest of his style... it doesn't come out to too much here. To call this script thin would be an understatement. It feels like a sequel, as though the filmmakers expect you to already know the characters and thus not require any development of any kind. The worst example of this is the story point of the two leads switching places. While this could be a fun story for character we know, this happens before we have learned anything about the lives these two will be switching, thus leaving it more puzzling than anything. There are also non sequiturs thrown in throughout the film that just grind things to a halt. There's about 20 minutes worth of scenes that have literally no impact on the rest of the film.

The film is also very dated. It's full of the blatant racism, sexism and homophobia that was far too prevalent a few decades ago. While you ultimately do have to keep the time of the filmmaking in mind, it makes for an awkward viewing experience.

The main thing that makes it watchable are the two leads. The script doesn't do them any favors, but Will Smith and Martin Lawrence try their best to sell the material, and they do have some good chemistry. Unfortunately, the characters are not very likable, making it difficult to root for them in the end.