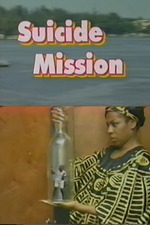 I am officially making it my life's mission to make it known that this movie kicks all kinds of ass and you need to see it.

A woman decides she wants a man...a married man with a family and a nice house. And she's willing to go to a corrupt witch doctor to get him.

Almost immediately, his wife becomes concerned when she begins to notice the changes in her husband as he openly cheats on her. He acts as if he's possessed by a cosmic force, and in a sense...he is. He casts away his own family for the affections of this evil woman, who keeps his soul in a vial so that she can possess him at all times.

It takes bringing him to his breaking point for the man to realize everything he's lost...But by the time he's awaken from her spell, will it be too late?

Fred Amata's movies tend to always have this motif running through them of a woman coming into a man's life and disrupting it. Sometimes it really is just bad magic...