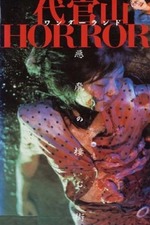 Welcome to the wild world of SOV Horror, Tokyo Style.

Daikanyama is a neighborhood in Tokyo that is colloquially known as Tokyo's Brooklyn. And it's the perfect backdrop for this short 80s horror SOV film that plunges three would be popstars into a manic scene of metal bands, movie killers and bizarre ghosts.

I've tried to transcribe the plot of this film as best as I can, and as I am not a native Japanese speaker, please bare with me. The plot is as follows: Three girls are training to become pop stars at a dance school where they dance to soft, cheesy pop music in neon tights. Think Killer Workout, and you'll get a good idea of what you're in store for here. While the girls are training, they are being watched by a strange and mysterious fellow who gazes at them from the wings eerily from his monocle, like a bond villain. Later in his office, the man invites the girls to a special training in Daikanyama at midnight. Eager to move ahead, the girls agree to meet up.

They arrive in charming Daikanyama as planned, and after taking a slight detour, are then ambushed by Gastunk, who proceed to play gnarly 80s metal. If you love metal, this movie is a treat and has a solid soundtrack. Then one by one, the ladies are hunted down and disembowled in various fashions, with only 1 surviving girl (I won't tell you which!).

Be on the lookout for Freddy Krueger and Jason making a random cameo appearance in this as well.