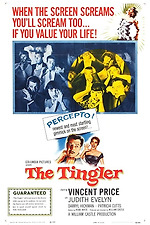 My daughter has recently turned 8. About a year ago I let her watch House on Haunted Hill with me (the original William Castle version) and she was a little bit scared but really liked it. She said she wanted to watch a horror movie with me again so I figured The Tingler would fit the bill, given how successful the last Castle-Price movie was.

Cut a long story short, I think I might have screwed her up for life. I’m getting teary visitations in the middle of the night, and she keeps saying she thinks the Tingler is coming to get her. No matter how many times I shrug and say “She’ll get over it”, my wife still won’t stop giving me dirty looks.

Flippin heck, though, this movie was a lot scarier than I expected it to be. I know for us hardened horror fans, it’s all pretty cartoonish and unconvincing, but there’s a lot of frightening imagery here. The Tingler as a movie monster is a stroke of fucking genius. Of course we know how impossible the whole concept is, but I think it’s hugely inventive and just a really fucking creepy idea. I had actually tossed around the idea of a screenplay about human spines turning out to be monsters (just because spines look like giant centipedes – I think I got this idea when I went to the chiropracter and saw his model backbone). I hadn’t seen The Tingler, and now I’m glad I never put much effort into that, because if I had I’d be feeling like a pretty big dope right about now.

But on top of all the Tingler action, we get that outstanding “nightmare” sequence that the deaf-mute lady goes through. I think this is what really upset my daughter – she seemed to cope with it up to the point that big hairy arm came out of the wardrobe, which caused her to run out of the room and shout to me to tell her when the nightmare was finished. That is a genuinely creepy sequence and that usage of red for the bath looks amazing. I thought the usage of colour in 13 Ghosts was a bit boring and nothing more than gimmickry – here it goes beyond gimmickry to become something very close to art. No, fuck that, it IS art.

Add to all this deliciousness the fact that we get to spend the whole time hanging out with a great Vincent Price performance, and I think The Tingler is a rousing triumph of a film. It’s a shame my daughter will have all those mental scars for the rest of her life, but at least the movie was good.