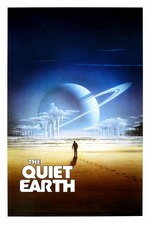 I've always loved last-man-on-earth storylines and, to be honest, the lack of zombies in this one feels like a relief.

Any film out of New Zealand prior to its status of production outpost for Hollywood - the Principality of Peter Jackson (and his Weta henchmen) - is a cinematic oddity by definition. The Quiet Earth reminds me a lot of the unique, national flavour of the speculative storytelling that permeated Roger Donaldson's ice-breaking Sleeping Dogs. Only here, the speculation is more metaphysical, somehow bigger in theme despite the massive reduction in human presence between the two. Sleeping Dogs is all about societal breakdown. The Quiet Earth is about individual breakdown and how, from within one personal experience, there's literally no difference between disintegration of one's mind and the disintegration of the entire universe.

So what exactly is going on in this story? Well, that's for Geoff Murphy to show you and for you to figure out. Maybe he has an interpretation in mind, maybe the author of the original story "knows" the answer. Personally, if that's the case, I never really want to hear it, because the delicious wonder of this film is that it is so open to interpretation. And yet, not at the expense of narrative cohesion or completeness. It's a rare thing to be given no concrete answers and not to feel like you've been short-changed in some way.

This film punches above its weight all the way. Auckland is turned into a convincingly barren deserted city. Planes fall out of the sky. We get magnificent natural vistas along with the intimate personal portraiture. The characters contain multitudes of possibilities - looks conveying what words can't, deepening the mystery of the piece. And yet the plot rolls along at a reasonably brisk clip, especially after the first act. The score by John Charles is majestic and beautiful (incidentally, Charles, Murphy and star Bruno Lawrence used to be in a jazz band before they thought they'd try making a movie - just in case you were wondering how "homemade" this movie actually is). And that final shot - I'd argue one of the great images of sci-fi cinema.

It's great to see this get the Arrow treatment. Fun fact: as pathological collector of physical media, I ordered this and never realised I hadn't received it. One day, I noticed something sitting in the hedge way down behind my letter box - it was a package with this movie in it, and it had sat through a full year in my front garden - all the way through an English winter and back. All I can say is - that plastic wrapping really did its job! It's taken me too long to watch this - a great little cult flick, and highly recommended.