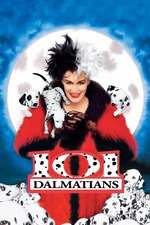 About ten minutes into this movie I realized that I should not have included it or the sequel in my disney challenge and now that it's over I'm genuinely dreading getting to 102 Dalmatians. The dialogue is clunky, but the clunky dialogue is better than the lack of it throughout almost the entire middle of the film because contrary to what I remembered the dogs don't talk.

The best part of the animated 101 Dalmatians for me is that Pongo is the film's lead and even though we get some minor dialogue from Roger, Anita, and Cruella (all of which is very good) the film is almost entirely told from the dog's perspective. This sets us up for the fact that the majority of the film's climax is entirely dog-driven. The dogs are the focus, and so they are given personalities and character beyond..just being dogs. We care about them in a way that we simply can't in this version.

That being said, the puppies and dogs (and weird raccoon puppets) are all super cute, and their cuteness combined with Glenn Close's portrayal of Cruella really save this movie from being completely unwatchable.