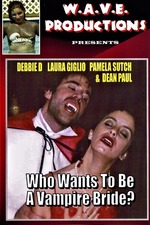 This is an absurdly cute WAVE movie and my queen Pamela Sutch shines in it, like all movies she is in. Three girlies move into a house and unbeknownst to them there is a vampire living in their basement. They awaken him and he tells them he has a GIANT SCHLONG. Well, how could they possibly resist him? So they all try-out to be his vampire bride.