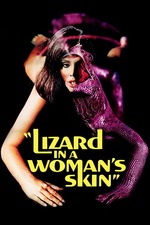 Following his audacious giallo debut with Perversion Story, director Lucio Fulci upped the ante to a feverish intensity with his next thriller, which reteamed him with star Jean Sorel, cast again as a suspicious husband. This time the film encountered considerable censorship hassles in nearly every country in which it was released (with the American AIP version, Schizoid, suffering the most), and Fulci and FX creator Carlo Rambaldi were even hauled into Italian court over one shocking sequence showing breathing, dissected (but fake) dogs mounted to a wall. Fortunately the film itself proved strong enough with withstand such tinkering, and Fulci was free to continue his experiments with the thriller format in several subsequent films.

Best viewed in tandem with Fulci's other efforts in the genre, Lizard is in many ways his most outlandish film (at least until The Beyond) and finds him refining the techniques established in his previous giallo, particularly his ambitious use of split screen and a storytelling method of loading most of the exploitative thrills in the first half with the narrative payoff emerging in the second. Brazilian-born Bolkan, who was already a solid international name thanks to her work in films like The Last Valley and The Anonymous Venetian, delivers a wonderfully nervous performance that foreshadows her similar, even more impressive turn in the sadly neglected Euro-horror masterpiece, Footprints. Sorel isn't given much to do this time, but future Euro-sleaze staple Strindberg and her distinctive breast implants make a powerful impression in their brief appearances. Also worthy of note are the dreamy, appropriately spacey score by Ennio Morricone, sadly in his only genre collaboration with Fulci as a director, and the impressively atmospheric cinematography by the always great Luigi Kuveiller (Deep Red). The only real debit is that, from a mystery standpoint, the film cheats a bit by having the guilty parties behave in a manner inconsistent with later revelations, even when they're alone and have no reason to do so (a charge that could also be leveled at Perversion Story). Much has been made by some critics concerning Fulci's odd treatment of hippies, drugs, and homosexuality, which could be read as anything from blindly naive to flat-out ugly and bigoted. However, given the context of the mysteries, they're probably just devices he used to find a way of unwinding the various knots of his narratives while delivering a little sensational juice in the process. Oddly enough, given his supposed conservatism, he clearly gives adultery a free pass in both films, a contradiction very prevalent in Catholic-influenced Italian filmmaking at the time.