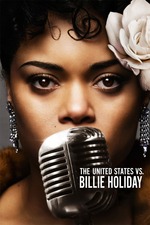 Andra Day deserves all the praise and acclaim she has received thus far, and plenty more. Her gut wrenching portrayal of the title character is awe inspiring. Even more commendable, is that she makes the film engaging; even when she’s the only element that does so.
This film could’ve (and should’ve) been more than it was. Only Holiday was flushed out, all other characters are one note. There are storylines about her life that aren’t explored or explained, and the director can’t seem to focus on one element of her life at a time. Interesting segments are instead rushed, and repetitive segments regarding the drug usage are drawn out. The screenplay doesn’t fully dive into who Holiday was as an icon as much as it does her as a victim.
This all being said, Andra Day should be at the top of casting lists. She absolutely is stunning.