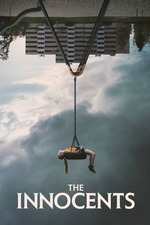 Horror films like Orphan and The Omen are perhaps more frightening than many films of the genre because they twist our perception of children. Most parents raise their children to be as angelic as they believe they were when they came out of the womb, so children being born evil or capable of evil is perhaps frightening to them because it means they failed. But children aren’t born pure, as writer-director Eskil Vogt explains in an interview with the Norwegian Film Institute. “I think children are born without any sense of empathy or morals, and we have to teach them that,” he says. In addition to what happens inside the home, what happens outside has as much influence on children. In Eskil Vogt’s The Innocents, a group of children meet at an age of discovering their identities and the powers they wield. The moral complexity of growing up and the destructive power of innocence is something adults forget.

The Thelma and The Worst Person in the World writer opens his second feature as a director with a score that plays like a lullaby — but it’s also far from one. Ida (Rakel Lenora Fløttum) may seem like the image of the perfect child as she rests peacefully during a car ride, but then she pinches her sister — hard. She’s mean, something unnoticed by her parents. This can come from a feeling of neglect, arising from the constant competition for attention. Her sister, Anna (Alva Brynsmo Ramstad), however, is autistic and needs all that attention. Ida acts out by putting glass in Anna’s shoes, but she doesn’t think she can actually feel anything. She steps on a worm, feeling unbothered by its death. Her actions may also be her way of acting out her upset over having to move, the film taking place entirely at their new apartment complex.

Soon, Ida meets Ben (Sam Ashraf) who shows her his telekinetic powers by moving a bottle cap in mid-air. While she can’t do Matilda-style tricks, she does show him her double-jointed elbows. They both take comfort in their peculiarities and they harbor a fascination with each other. Then comes Aisha (Mina Yasmin Bremseth Asheim). Unlike Ben, her power is telekinesis and she is able to feel the pain of others, which draws her to form a strong connection with Anna. The group has the kind of bond we relatably did in childhood with kids in our own neighborhood. They see qualities in themselves that adults don’t and understand themselves differently, too. They also find the attention they all lack at home — another element that brings them together. But as is often the case, children can be negative influences on each other and be the worst bullies. As their connection grows, so do their powers, and their dynamic becomes a destructive one that spirals into violence. Vogt crafts characters that show how innocence essentially means morally grey. Good, bad, they can’t tell the difference. It’s like a hero or villain’s origin story where they chose if they want to use their powers for light or dark.

The Innocents is quiet for psychological horror. It’s unnerving at times in its stillness as the children’s unpredictability increases. The cinematography captures the vibrancy of the nature that surrounds them like a comforting shield that makes these children all the more inexperienced about life. When we were kids, we used to pull the legs off a Daddy Long Legs and get enjoyment out of watching the legs continue to twitch. That enjoyment comes with no thought to the pain-causing the insect. We threw things, we hit people, we were bullies, we didn’t watch our mouths. The Innocents is an uncomfortable watch, as it has the audience reflect on all the mean things they did at that age. It’s an unpleasant watch at times, too, because these children make choices that are cruel and unfathomable to us now as adults. However, the film does carry the natural sweetness that forms in the air around meaningful friendships.

There is much more freedom to be yourself before you reach the age of puberty, so casting the right kids is essential to highlight how both dark and magical this time of youth is. The film is made up of a talented group of youngsters who capture the facets of good and evil, and the innocence of not knowing the difference. They all portray characters who carry different experiences in terms of their home lives, and they evoke the different emotions that come from that in their naturalistic performances. What’s especially worth noting is the rarely-seen representation of a child on the severe end of the autism spectrum. While the actress herself isn’t autistic, it’s clear that through Vogt’s research, he was able to aid her in capturing regressive autism and the impression that she is trapped inside her own body. But the film, through Anna and Aisha’s heartwarming bond, shows that Anna is just as capable of feeling things as anyone else. Her mind is turned into a powerful force; her disability is turned into a superpower. While Ida’s own powers never really manifest, she has the biggest arch as she’s the one who develops a moral compass. There is some discomfort found, however, in how the characters of color are portrayed here, especially in terms of the way each child’s family unit is written. Ida and Anna’s family is strong and unified, while Aisha’s and Ben’s are broken. What happens to characters of color, too, leans into tired tropes and may suggest implicit bias — while most likely unintentional.

The world looks completely different now compared to when we were children. We may only think about the magical parts, but there was also something freeing about never knowing our limits. The Innocents captures freedom that is now lost. If Vogt has accomplished one thing, it’s making us look at our childhood in a different way - and making peace with it, too.