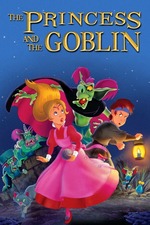 Of all the Disney knock-offs throughout the '90s, this is one of the least desperate, harkening back to YA fantasy lit and older-school storytelling in many ways. Naturally it didn't come from any of the major Hollywood studios. There's no central romance OR musical performances (except one at the very end)! Though it's a bit of a compromise, as there's no escaping the princess motif, nor villains defined as such by how ugly they are compared to the unblemished master race white kids we're supposed to root for.

And just as a general rule of quality measurement, if the answer to the test question "could your animated film be mistaken by somebody for a Saturday morning cartoon?" is yes, then you're probably not doing it quite right. If you were channel surfing (for those who remember what that is) and this appeared along your route, neither the animation nor the characters nor the story would make you pause on it for longer than a few seconds, alas. It's kind of sweet and reminded me hazily of a favorite book I read as a kid (Bruce Coville's "Goblins in the Castle") but with or without trying to be a precise replica, it is just another sewer rat scavenging for Disney's leftovers.