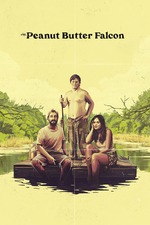 The Peanut Butter Falcon is a laid back road movie, whose indie clichés are redeemed by strong performances.

Zak is a young man with Down Syndrome who dreams of becoming a wrestler. He escapes his nursing home and with the help of a taciturn fisherman and thief played by Shia La Boeuf sets off rafting toward a famous wrestling school, in a wacky modern version of Huckleberry Finn.

Zack Gottsagen gives a funny and charismatic performance in the central role. Zak has learning disabilities but he is also cunning, free spirited and strong enough to yank a man’s arm out of its socket. The screenplay took some ideas from Gottsagen’s own life, switching his ambition to become an actor with one to become a wrestler.

LaBoeuf is also good as Tyler, a grungy hobo with a scrubby beard who gradually learns to trust his unusual travelling buddy. Dakota Johnson is additionally fine as Zak’s well meaning caretaker, although her character feels somewhat superfluous. Overall, this is a great film for actors known mostly for appearing in terrible movies.

Some of the minor roles are also well cast, with granite-faced Thomas Haden Church of Spiderman 3 appearing as the Saltwater Redneck, Zak’s wrestling idol. A character actor named Wayne Dehart also pops up in a funny role as a blind preacher the pair meet along the way.

The first act bounces awkwardly between a grim storyline involving Tyler being caught stealing and wacky scenes of Zak trying to escape his nursing home wearing only tighty whities and soap. The story begins to come together after the first 20 minutes as things settle down, although the subplot of Tyler being pursued by underworld figures from his past never really fits in with the rest of the atmosphere.

While the film is rarely laugh out loud funny it’s mostly as laid back as you would expect considering it takes place drifting down a river, and is an easy watch. By contrast a couple of scenes such as the moment where the pair are nearly run down by a fishing boat crossing the river are also quite tense and well done.

The ending manages to be uplifting in more ways than one, and reveals the true power of wrestling as a way to turn misfits into superheroes. The movie is overall as wholesome a piece of entertainment as you’re likely to watch in 2020, and as American as apple pie- with a side of peanut butter, obviously.