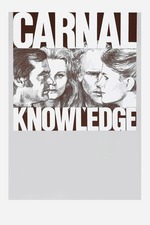 It must be standard protocol to give a sharp disclaimer on the misogyny of the main characters in this movie, as if the movie - if it is good at all - is somehow good in spite of their awfulness. It seems to me, no disclaimer is needed because the movie is squarely ABOUT their awfulness. Your ability to take that and engage with it is where your relationship to this movie will either succeed or fail.

We don't often get character studies like this: studies that so much force us to identify with someone (and yes, even like them for elements of humanity or humor or observation) in spite of the striking knowledge of how petty, shallow, selfish and manipulative they are. If this is the sort of thing that causes us discomfort, I'm surprised we find comfort with ourselves everyday without much hesitation. Do we truly not see ourselves here, as petty judges of how people meet or fall short of our personal preferences?

"You can't make fucking your life's work," Sandy tells Jonathan. "Don't tell me what I can't do," Jonathan quickly replies. Carnal Knowledge is clearly a movie about sexual obsession. The deification of a tiny moment in time, one of the most temporal pleasures that exists and something that, culturally, has become more and more openly discussed and sought, to the point that we even spin things as being "sex positive" or "sex negative", as if any of that really matters. Sex will always be obsessed over and will always be treated positively and negatively, despite our most graphic representations in pornography or the most concealed and coded representations of Hays era Hollywood. But it's hard to see if all the obsessing hasn't destroyed something of our ability to relate.

Despite being set against the changing sexual mores of American culture, Carnal Knowledge gives us two men whose relationship to sex never changes. From the naive bombast of youth to the cynical disenchantment of middle age, Jonathan and Sandy will never be satisfied with where they are or who they're with. Fixation and objectification. Manipulation and destruction.

There is more to them then sex, clearly. In fact, that's one of the film's most clever observations, placing 98% of the action outside of the bedroom and, instead, in the overly verbal conversations of two people who may be consumed by sex but are always defined by language. They can't escape it. Somehow those two things - sex and talking - are deeply intertwined. The appetite for the new, the different, the frequent, the exotic, the perfect, the messy, the ............ not-completely-quantifiable is insatiable. Never fulfilled. Only perpetuated and incubated by a continual fixation on something that removes personality and reality from the other people involved. It is no surprise that it ends with a slide show of crushes and exes, the parade of people Jonathan fixated on for whatever period of time and yet proved to never live up to some internal perfection that can only be achieved by a literal self-actualization.

This movie is sharp and cutting and achingly brilliant in its human observation and careful construction. It sounds like a play and yet works so much better with a specific frame, an intimacy and focus only achievable in cinema. Mike Nichols proves himself, yet again, a master.