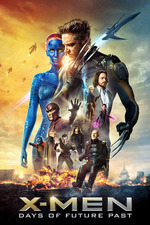 Mutant abilties, time travel and CGI are not what drives the most recent X-Men flick; it is the well rounded, ridiculously tense and emotional conflict that gives DOFP it's power. Mutant vs. Mutant, Mutant vs. Human, Human vs. Human, Mutant vs. Self, and etc. But for myself, nothing compares to the conflicting relationship between young Xavier (McAvoy) and young Magneto (Fassbender) Very rarely is the audience privy to, or even drawn to, both sides of the Good-vs-Evil coin; but Singer executes what is arguably the most compelling relationship in the Marvel Universe in remarkable fashion (the airplane scene was perfect).

DOFP (and the X-Men universe as a whole, now) is certainly not free from plot holes, but the film does not suffer from them. Singer's fast pace and narrative style postpones any, lets call them logical irregularities, until after the film is over. The cast is almost unbelievable for a comic book adaptation, with Fassbender absolutely fucking killing it and Hugh-Jack, J-Law and James-Mac never faulting for a moment.

DOFP is not only the greatest addition to the X-Men franchise, but it has also reinvigorated my personal interest in the series. Hell, I may even watch them all over again. And to think, somehow Singer came out with Jack the Giant Slayer last year. Welcome back, Bryan.