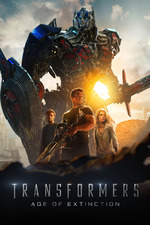 Transformers: Age of Extinction honestly has me wondering whether or not Michael Bay even works from a script; or if he just props up on-set with a plethora of simplistic ideas that he has written down on the backs of old cocktail napkins--and at times I feel like there isn't even that much preparation. I also feel like not being able to remember a film the day after you saw it is a pretty good indication of how bad it truly is. I swear to God--no, I swear on the ALL-SPARK rather, that it's been 4 days since I watched Age of Extinction and I literally still cannot remember what took place in the movie. Sure I remember some main plot points: i.e. humans are advancing the Transformer technology in order to kill off other remaining transformers, turns out Megatron's bad attitude got transferred into one of them, and the extinct(?) Dino-bots show up to save the day. Wow. Every last scene gels perfectly together to (trans)form one horrendous mess.

Everything about the film is ridiculously bad, obviously with the exception of special effects. AOE is a collaboration of up-close action shots of robots (brought to you by CGI, of course), fetishistic scopophilia, and slow motion, up-close action shots of robots: all strung together by a couple scenes of miserably wrought-out human drama. The acting is under-par as usual, but thats to be expected by now. The most terrifyingly brutal aspect of AOE is, however, the dialogue. It honest-to-ALL-SPARK frightens me that studio executives allowed this to happen. For example:

I wasn't sure whether to laugh (because the lines were that bad) or cry (because the lines were THAT bad). In any case, this is a tired and wearisome franchise. If not already, Transformers has officially lost it's (all)spark. Let us all take a moment to pray that this latest entry from Michael Bay drives the series into extinction.