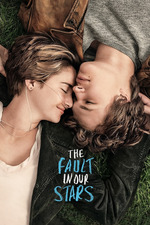 It's hard not to at least respect the tragedy in The Fault in Our Stars. The life of a terminally ill cancer patient is one I couldn't begin to imagine. Shailene Woodley, who is clearly modelling her career after Jennifer Lawrence, plays her role as Hazel with guts, grit, and grace. Her relationship with her mother was very well done, but I found the scenes hosting Hazel alone (crying, thinking, waiting) to be particularly compelling. The girl can act, and she's proven it again.

The issues I had with Fault were of pure literary nature. Most of the characters do not feel organic aside from Hazel, Frannie and Van Houten. The relationship between Hazel and Augustus, which is the selling point of the film, feels orchestrated. The dialogue, the circumstance and the nature of their relationship are all ill contrived. The amount of times we hear the line: "Oh, Augustus!! <3" has me wondering if the director/writer has a hard-on for the bible or if he simply wants to remind the audience of his character's name. My least favourite part of the film, besides the whole cigarette "metaphor" (wow that was brutal), was the amount of times cancer is used a plot device, roadblock, emotional manipulator or motivational factor. I understand three of the main characters are sick, but every time the film turns a corner it uses cancer as a handrail, or a doorway, or a set of stairs, etc. and it becomes overbearing and eventually exhausting.

The film's greatest success is born out of it's theme: that there isn't always an answer out there for us, and that things don't have to happen for a reason. Arguably the film's best scene features Hazel and Gus meeting Van Houten -- a tired, pessimistic drunk who won't submit to the naivety and innocence of the young couple searching for answers -- and it steers the film forward.

The film runs long for only 2 hours and 5 minutes -- and with a theatre full of females "ooohing", "awwwing", and "OH MY GODing" it wasn't exactly a pleasant viewing experience. However, I understand the film is tailored for a specific demographic (women trapped in a summer full of comic book adaptations and children's animation films), so I can respect the studios approach in marketing and appreciate the diversity that Fault brings to the theatres.