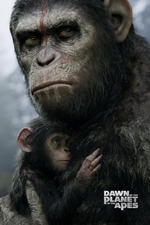 Dawn of the Planet of the Apes is not solely a compilation of grand action sequences or visually stunning effects that we've come to accept from summer blockbusters; it is instead a complete, well-rounded cinematic journey that sets the standard for narrative designs in big budget movies. Director Matt Reeves can do no wrong here, however, he also makes sure to include all the right. Every aspect of the film works so genuinely well together that its hard not to call this the most well-crafted summer blockbuster since Nolan's Dark Knight Trilogy.

The opening prologue does a marvellous job at bridging Rise with Dawn: reminding us of what happened at the end of Rise, as well as informing us of what has occurred prior to Dawn. The film takes a very grim, cynical view on moral panic in the wake of contagion as the human population destroys what of their civilization the Simian Virus has not. Reeves makes sure to include any anecdotal information to help make the film as compelling as possible, and his reach exceeds his grasp.

Dawn does almost everything in exceptional fashion: an entrenched, layered plot, rich character development, focused storytelling, intermittent comic relief, visceral action sequences and grade A visual effects/CGI. Reeves also draws an incredibly symetrical comparison between the apes and humans which cannot go unnoticed. But there are 3 things that lift Dawn from great to magnificent:

1. Innovation - The film does not linger on thoughts or ideas developed by it's predecessor. Dawn paves it's own path instead of retreading (much) through already-wrought-out material as parodied in 22 Jump Street.

2. Character Motivation - This may be the most remarkable aspect of Dawn. Every character, from Caesar to Koba to Dreyfus, is given enough motivation for the audience to believe in the choices they make, good or bad. Reeves allows us to understand why the villains act villainous; he doesn't just throw a spoke in the tires.

3. Caesar - The film is centered around a simian protagonist who we undoubtedly favour more than any of the human characters. Whereas Rise's main lead could also be designated to Will (James Franco), Caesar owns this film, earning not only respect but admiration from the audience. Andy Serkis, the pioneer of motion-capture in modern day cinema, creates a character out of CGI that seems more real than any human. It's fucking incredible.

Overall, I couldn't recommend this film more. Dawn is engrossed with all the makings of a successful summer hit. It's the type of film that has you asking why you even bothered with Trans4mers last weekend.