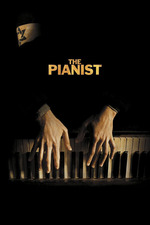 Generally speaking, there are two Holocaust films that are regarded as the best: that is, Schindler's List and The Pianist. And now that I have seen both, I can say with confidence that The Pianist is superior to Schindler’s List in every possible aspect. When considering the effectiveness of the brutality portrayed on screen, The Pianist blows Schindler’s List out of the water. Just to name a few, the scene of the man getting thrown off the balcony from his wheelchair, and the scene where the nazi soldier lined up the Jewish workers and executed them, were the ones that hit me the hardest emotionally. But why? You may ask, because Schindler’s List has some of the same scenes that I have mentioned and ones that are arguably just as brutal. The reason that these types of scenes in Schindler’s List didn’t generate an emotional reaction from me was because the story was following Oskar Schindler, a non-Jew. Schindler was always safe from these acts of brutal violence, but Szpilman in The Pianist was not. Every time Szpilman was subjected to an act of violence we are left thinking “that could have been Szpilman.” Compared to The Pianist, Schindler’s List feels like it moves around aimlessly finding violence in the ghettos, or in concentration camps, where in The Pianist we are following a family who is actually living through these events, giving characterization and context to the brutal conditions and actions that occurred in Poland during the Holocaust. It is the lack of characterization of the victims of the Holocaust in Schindler’s List that makes the film feel like it lacks overall heart and soul to me.

This film does often get lost in the shadow of Schindler’s List and that is a shame because I feel that The Pianist is the most brutally honest portrayal of a historical event ever put to film. Roman Polanski's actions obviously don’t help the image of the film at all, but I personally believe Polanski to be one of the greatest auteurs of his era. I unfortunately can’t call him one of my favorite filmmakers because of what he has done, but he is certainly one of the greatest directors of all time in my opinion. I can usually separate the art from the artist pretty well as long as the actions that they receive backlash from aren’t prevalent themes in their films. From what I know, Polanski does not sexualize young girls in any of his films, so I have no problem loving the film for what it is and not for the director. Although I haven’t seen as many Polanski films as I would like so far, it seems like he has one of the most complete and innovative filmographies of any director.

The fact that Polanski was a Holocaust survivor himself, and lived through some of the events that he is portraying, adds a whole other layer of brutality to the film. Although Polanski wasn’t even 10 at the time of the Holocaust, making this film must have brought back some memories of the time and as a result was challenging to complete. Since he modeled some of the scenes based off of what he remembered from his time in the Polish ghettos, this makes The Pianist extremely authentic in its world building. This along with the film’s nihilistic tone make this as devastating as a film can be. The runtime isn’t a huge problem as it is so easy to be immersed in this world and marvel at the realistic set designs and flawless cinematography. In a word, The Pianist is perfect. There is not a single aspect of this film that I would change in the slightest way. This film may have the highest caliber of directing that I have seen in a film from the 21st century. Truly a landmark in cinema.

Number 2 on my Top 50 favorites of all time

The Meyerowitz Stories (New and Selected)