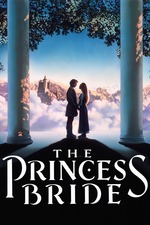 Part of The Essentials
letterboxd.com/martinjacob49/list/the-essentials/

Get the hate comments ready. Definitely get ready to chew and curse me out and give me death threats.

I know, shocking, but hear me out. Unlike most people, I did not grow up watching this movie. Part of the charm most people find in the film was because so many kids related to the adventures of Cary Elwes and his quest to claim the hand of Princess Buttercup. That's part of the reason it became a cult classic, plus they loved how funny and timeless it was.

With all that said, I came into The Princess Bride with adult eyes, not kiddie eyes, so that's says a lot about my overall perspective. Had I watched this as a kid like I did with many Disney films, I'd have a nostalgia connection and likely enjoy it a lot more. But I'm sorry, I don't think a lot of this movie works and cannot see why it ever reached the essential status for many people.

First off, what did I like in this movie? Well, I loved Cary Elwes. Yeah, he was very charismatic, charming, and carried the movie through its many flaws. That swordfight was highly energetic and fun, and I also enjoyed the supporting cast, such as Andre the Giant, Wallace Shawn, that Spanish guy, and a bizarre cameo from Billy Crystal. There's also impressive set designs and for a film that disappointed me, I will give the film credit for not being overly long.

OK, now, the bad. First off, the way the film is told, a framing device told by a grandfather to his sick child, doesn't interest me at all in the slightest. Yes, you have the great Peter Falk telling this story, but every time the film cuts back from an "exciting" scene back to the kid asking questions to the grandfather, it really took me out of the movie. Seriously movie, the only time such devices work is when they work in the context of the story. Films like The Walk, The Lone Ranger, and even Iron Man 3 has similar devices work because they do a better job at connecting them to the characters and their life stories. What do we have here? A granddad just reading a fantasy book to his sick grandson. That's it. No connection. Don't give a crap.

Also, for a film heavily praised or being hilariously funny, I only laughed, like, once or twice. Most of the jokes do not land for me at all. The attempts to do a campier fantasy story, though yes, it's an intriguing effort no doubt, but most of these jokes and lines came off to me as really awkward and confusing, like they had no idea how to balance a fantasy story with characters people care about with wacky comedy. Maybe Mel Brooks should have directed this as an intentional spoof??? Just saying...

And probably my biggest issue with the film is the princess bride herself... good gosh is she a freaking bore. The romance with her and Elwes fails because the initial development is rushed and I didn't feel the supposed weight of him being supposedly dead for, like 5 years, because there was little time for real growth in their relationship (I blame that snooty kid for ruining story potential). And not only that, but her character is a royal pain. Heck, I don't even think she's a character at all. She literally spends the entire movie whining and moaning about how she's not afraid of anything, but she's constantly kidnapped and held for ransom throughout the film and is in constant need of rescue. Seriously, Princess Buttercup is just about as stupid as Princess Peach. Ok, sure, this was the 80s, and most of these stories at the time had princess damsels in distress at the time, but at least the older Disney princesses, like Cinderella and Snow White had defining traits that made them still relatable even in a more progressive age. Here, I just don't get anything. All I see is this idiot blonde who says she can do anything but needs an everyman to save her.

Give me a break. Robin Wright deserved better writing than this. (Forrest Gump).

So yeah, again, I'm in an extreme minority, but I seriously don't get the love for The Princess Bride. It has an annoying protagonist who's poorly written, mostly unfunny humor, mismatched direction, a pointless framing device, and an forgettable score from Mark Knopfler of Dire Straits???? GOOD GOSH DOES THIS MOVIE SUCK!!!!!!!

Look, I get that comical fantasy films are hard to come by, but at least they need to have genuine laughs while telling a quality story. Matthew Vaughn's Stardust, a flawed film to say the least, works better as a film because he was able to blend a creative story with wacky humor that lands. This is a cluttered mess of forgetability with some of the most awkward jokes I've had to encounter.

Not an essential in my book, but if you're one of the many that do, more power to you!

Musical Shoutout...
Mark Knopfler deserved better treatment than this film, so here's a Dire Straits song to cheer me up, "Walk of Life". Love rock songs that cut to the heart and showcase the trials yet joys of life, and this is no exception. An amazing usage of the accordion to create a creative celebration of the spirit, and songs like this show why Dire Straits deserved their recent Rock Hall induction.