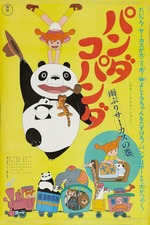 The characters are the same as in the first part, following up on Mimiko, the papa panda, and the baby panda. Soon a little tiger comes to their house, who escaped from the local circus. The owner is looking for it. On this occasion, the animals meet new friends, new challenges and between games, laughter and a great storm that floods everything, they are just even happier.

I must admit that with this type of film, I understand more the wide diversity of ideas, styles, colors, forms, caricatures, and stories that exist in Japan and East Asia. Disney comes to mind as the maximum (and sometimes only) representation of animation, but its scale is indeed so wide and in Japan it has grown monumentally. The animated films of the seventies would be more introductions to a new culture, but also the impulse towards the appearance of television series, posters, magazines, and collectible figures.

Again, Isao Takahata surprises with his creativity, and Hayao Miyazaki with his vision of thinking and thinking and then take the notebook and let go. The music is more captivating than in the previous version, and in a trip by train that they make under the water, I said, this is beyond the conventional and with real actors this does not happen. It remains imperfect, and acquires defects that, over time, these masters were improving, but it's nice, it's sweet and it's Japan! Now I see that the future "My Neighbor Totoro" (1988) polishing towards something big.