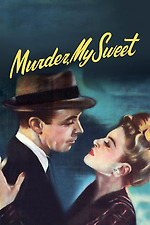 This was my third time around the block with ol' Philip Marlowe, the everyman's gumshoe, although the first from a chronological standpoint. I've seen him played by three different actors bringing very different styles, and it's been a lot of fun to watch the changes. I imagine this is what it's like for Bond fans, only with the speed coming from witty line delivery as opposed to bullets and fists, and confusing plots instead of gadgets.

Marlowe (played by Dick Powell) is hired by a man named Moose to search for an old fling from his past, at the same time as he's hired to accompany a flamboyant man to buy back some stolen jewels. Naturally, both cases are not only far more complicated than they seem at first, but are also hopelessly intertwined.

It has every hallmark you could ask for out of a film noir, largely because it was one of the early entries that helped develop the genre. We have harsh lighting and camera angles, menacing shadows (and shadowy figures), an intriguing opening scene followed by an extended, narrated flashback, a femme fatale or two, and snappy dialogue left right and center. It may not be my favorite example of noir, but it helped set the formula for success, and should be given credit for such.

Powell is great as Marlowe, as he shows us that while he may try to stay a step ahead mentally, his feet can't always keep up with his mouth and it gets him into trouble. He is flawed, which goes a long way to build our sympathies for him, but he is endearing in his own right, the way he is determined to outsmart everyone around him without talking down to them. There are strong turns as well from Claire Trevor, Mike Mazurki (in a pitch perfect casting choice), Otto Kruger and Anne Shirley, but for me, it's the Dick Powell show.

The plot is almost laughably complex at times, but it helps to put us on our heels, on even footing with Marlowe. I loved the way the blackout effects played out, as visibly old as it may have looked, and director Edward Dmytryk did a great job adding to the disorientation once Marlowe is knocked out and drugged.

This is an easy recommendation for film noir fans, especially if you're looking for one of its starting points.