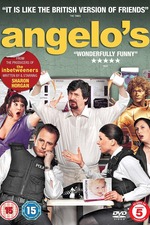 Amusing short film written by and starring the gorgeous and talented Sharon Horgan, Trafalgar Square spoofs the fly-on-the-wall docusoap genre that was so prolific on British TV in the late 90s and early 00s.

It follows a day in the life of the various and diverse people working in and around London's Trafalgar Square; Horgan and Paul Garner's police officers who happen to be married too, Miranda Hart's unlucky in love illegal minicab driver, Simon Farnaby's failed actor and living statue street performer and, best of all, Steve Brody's cafe owner Angelo who, ironically given his own Italian nationality, despises all tourists and immigrants.

This short would later be retweaked (dropping the one dimensional character of Russell, the street cleaner whose job was to clean the pigeon shit off the statues, and adding new characters such as a chavvy friend and a black yoot' boyfriend for Angelo's uber-chav daughter) to form the basis of Horgan's 2007 Channel 5/Paramount Comedy Channel sitcom Angelo's, a low-concept ensemble driven comedy series which centred the action around Angelo's cafe, where each character ultimately congregated.