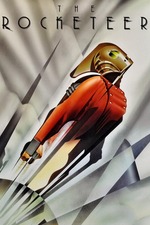 I was the right age in the late '80s and early '90s for most of Hollywood's attempts at The Big Summer Movie. In those years I left infancy behind and began to creep towards puberty meaning that films like Indiana Jones and the Last Crusade, Dick Tracy, Batman, Batman Returns and Robin Hood Prince of Thieves were all 'must see' movies for me during the long six weeks off from school.

The big movie of 1991 proved to be the aforementioned Robin Hood Prince of Thieves which I saw a staggering five times at the cinema, bought the Bryan Adams single (thereby helping to keep it at number one for an especially staggering, still unbeatable sixteen weeks) the tie-in novel and 'making of' book, and even received the toys for Christmas. But one other film that got me excited that year was The Rocketeer.

As a kid who was really into the golden age of Hollywood I loved the whole idea of The Rocketeer. I went out and bought the original graphic novel the film was based on, reading it from cover to cover and dreaming of what the movie would be like. Unfortunately if my memory serves me correct, The Rocketeer didn't make much of an impact box office wise on its initial release (a quick glance around the net confirms thus; noting that its links to Disney turned off the target teenage and above audience the film had hoped for, and nixing the sequels proposed) and even to my young eyes I did feel that there seemed to be a certain degree of it that was getting by on auto-pilot, but I enjoyed it for what it was; a good old fashioned adventure with a touch of the Saturday morning pictures serial.

Watching it again for the first time in many a year, I'm impressed by the affectionate evocation of both America and Hollywood in the late '30s. Whole scenes around the airstrip and the diner look like Norman Rockwell paintings come to life, whilst the film channels the glory of tinseltown with Timothy Dalton as the villain of the piece; a Nazi spy who has infiltrated the film industry to become a Flynn/Fairbanks style matinee idol, rubbing shoulders with Clark Gable and WC Fields. His henchman, played by a somewhat Dick Tracey-esque latex mask clad Tiny Ron, is also a homage to Rondo Hatton, an actor catapulted to B movie fame as a result of acromegaly; a tragic condition that affects the pituitary gland, deriving from tumor growth and cell mutation to make him Universal's very own monster who didn't require make-up to terrify audiences.

Granted Bill Campbell makes for a very ineffective and rather dull lead for an action adventure blockbuster, but that too is an example of the film tipping its hat to the serials of old, where all that was required of its leading men was a certain square jawed, clean cut, overgrown boy scout style image. The film surrounds Campbell with colour, be it Jennifer Connelly's glamourous leading lady, Alan Arkin's faithful old sidekick or Dalton's lip smacking pencil moustached baddie. But you can't help but feel that by the '90s, a blockbuster film needed a hero more engaging than Campbell proved to be. This was after all the time of Bruce Willis and the like - maybe that's why it failed to soar?

Released now when every summer success seems to be a Marvel picture, I imagine The Rocketeer would fare very well indeed and benefit greatly from the advances in CGI and a sharper, snarkier script. But I think something would be lost too - in '91 this throwback stuck out like a sore thumb. Made today, it would just be the same as everything else on offer at the cinema and rather soulless for it. As it is, this is an overlooked fun movie from the 1990s that deserves reappraising. It's also a nice enough Saturday matinee.

The Hunt for Tony Blair