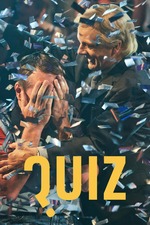 COVIDEODROME: A Quarantine Challenge
Number 20: A film where someone makes a big crazy conspiracy wall.

"So come on then, what's the answer? After all that. Tell us. It's killing me"

I don't think they did it.

I could never really be arsed with Who Wants to be a Millionaire. I remember watching its first run and finding it exciting enough, but that quickly palled. It was just the same thing each show, presented by one of TV's most unlikeable personalities, Chris Tarrant. As a result, I wasn't watching it by the time Major Charles Ingram was accused of cheating his way to the million with the aid of some convenient coughing from members of the audience, including his wife (and former contestant) Diana. But I do remember reading about the case - being splashed across all the newspapers, it was impossible not to - and I was just as unconvinced then as I am after watching this three-part ITV dramatisation. It just doesn't make sense. How was Ingram supposed to be able to differentiate the 'helpful' coughs with the many other coughs that occurred within the studio that night (almost 200, according to the defence as shown here) and how was his wife, or the co-conspirator the prosecution brought to court, Tecwen Whittock, to know which questions he needed help with anyway? Again, the defence here is shown to have highlighted an 18 minute run of questions Ingram got right in which no suspicious coughing could be heard. They also conclusively proved that the evidence tape used by the prosecution had been compiled by Millionaire's production company, Celador, amplifying the coughs and generally editing the tape to fit their claim that the Ingrams had cheated. Really, when you consider these details and many other sound arguments and clear facts that came to light, it's staggering that the jury found them guilty.

And if they were guilty, they certainly didn't deserve what followed. A trial by media and public opinion indicative of so many incidents at the turn of the century; the press intrusion and a campaign of terror that, at its lightest saw them harassed by 'jokers' coughing at them everywhere they went, and at its gravest saw their pet dog murdered.

Quiz features another chameleon-like turn from Michael Sheen. An actor renowned for portrayals of figures in the public spotlight, his decision to take on the role of gameshow host Chris Tarrant may appear small beer compared to playing Britain's former premier or one of the greatest names in English football, but it's a role that benefits from the same degree of commitment and professionalism from the actor who, once again, disappears beneath the guise. It's a given that Sheen will take much of the plaudits, but Quiz really belongs to Matthew Macfadyen and Sian Clifford as Charles and Diana Ingram. He is perhaps best known internationally as Mr Darcy in Joe Wright's Pride and Prejudice, whilst Clifford is now famous for playing the neurotic sister in Fleabag, but both are reliable performers with years of incredibly solid, strong and unshowy performances on British film and television behind them. Their work on Quiz can be added to their respective roll calls of accomplished, subtle and rewarding work. There is also great support from Mark Bonnar and Helen McCrory and the whole thing is beautifully, wryly judged by writer James Graham, who adapted it from his stage play, and director Stephen Frears, who follows up his acclaimed work on A Very English Scandal with another exemplorary study in our fascination with controversy.