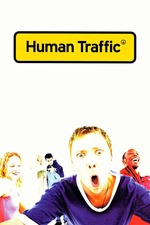 "What's your name?
What have you had?
Reach for the lasers.
Safe as fuck"

Man is this film ever a time capsule. A Trainspotting cash-in, it's nonetheless cheap and cheerfully enjoyable in its own right - and more, it resonates. I know people who lived like this. Shit, I kind of lived like this and I have to tell you it's damn strange to see it now simply as an observer.

The themes of alienation, having to deal with unemployment or shit employment, and living for the weekend when you're in your twenties, are conveyed with well crafted and palpably real flair; a suitably anarchic and inventive breaking-the-fourth-wall style between the kinetic bombast of images and tunes from the chemical and clubbing culture.

I love the scenes of the alternative national anthem, ranting over pints about shit boy bands, the piece to camera about pill paranoia, the scene where Simm and Andrew Lincoln say to one another what they really think, Nicola Reynolds'* doorstep press conference upon being unemployed, Howard Marks' 'spliff politics' cameo, Dyer and Richard Coyle's 'Star Wars is a drug film' talk, the aforementioned Factsman moment, and the overall believability of the group on screen. It really is great casting. Yes, Danny Dyer is in it. But at least he's playing the soppy cunt he clearly is.

Essentially this is how we used to live circa the end of the 20th Century/start of the 21st. Christ, when did we get so sodding old?!

*Nicola Reynolds is great in this, but you'll see she's pretty much removed from all the publicity and poster art. That's because there was a falling out when she asked the filmmakers for her wages. She hadn't been paid and quite rightly, she wanted her money. Johnny Vegas, her co-star in the BBC3 comedy Ideal, mentions it in one of the DVD commentaries for the sitcom, telling the film to pay her what she's due.

Men Who Sleep in Cars