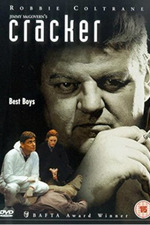 The second story in Cracker's final season saw the script writing duties being taken up with season two's producer and future Shameless creator, Paul Abbott. On paper, Abbott would seem a very good fit for Fitz, but that doesn't really come across with Best Boys, the first non-McGovern script since The Big Crunch, and it proves to be just as disappointing as that story.

We're on familiar ground with Best Boys, as it's essentially something of a retread of To Say I Love You, the stand out story from the first series. Like that, Best Boys tells the story of two of life's rejects who come together via mutual attraction and leave death and destruction in their wake. Like To Say I Love You, the climax ends with one of the perpetrators trying to take revenge on family too, with Fitz desperately looking on. The twist here being that our star-crossed killers are both men.

Liam Cunningham and John Simm give solid performances as the two killers, with Cunningham being especially effective as the closeted former squaddie who has shut his eyes and mind to his true sexuality all his life until Simm's embittered and troubled foster home reject comes along. Unfortunately, because Abbott's script depends on the tragedy that is the repressed nature of Cunningham's older man, the overall storyline feels far too coy and chaste, leading us to wonder if they were actually skirting the issue (for fear of the then draconian media watchdogs who would authorise any number of violent sadomasochism in your average Cracker or crime drama, but would probably baulk at a man kissing another man) than for any real dramatic intentions.

One scene in Cunningham and Simm's workplace really struck me as dated too, or rather the attitude that it provokes is dated. Simm's 17 year old work experience is shown to be repeatedly sexually harrassed by the older, predominantly female workforce. The opening scene showed them attempting to de-bag him and, this particular scene, shows one girl sexually molest him by groping his genitals, 'for a laugh'. Cunningham is incensed (the motives, the script implies, is a mixture of his protective feelings towards Simm and his jealousy at someone else doing what only he can dream of) and fires the woman on the spot. The thing that struck me is how the rest of the workforce are convinced that she cannot possibly be sacked for something like that. I'd like to think that sexual assault at work is treated more sympathetically and with more understanding now.

The flatness of the central plot is also reflected for the regulars too, with little actually going on for them other than Fitz's wife's erratic post natal behaviour and Penhaligon's rather petulant demands for promotion in the wake of Beck's death. The big change in this story is that Wil Johnson's character Skelton has moved from uniform to CID, and seems to have lost his Brummie accent somewhere along the way - perhaps Anson Road nick should have been investigating that disappearance? Overall, things are beginning to feel too familiar and, with Fitz bringing his newborn babe to work with him and convincing DCI Wise to babysit, too damn cosy for what is supposed to be an edgy, groundbreaking drama.