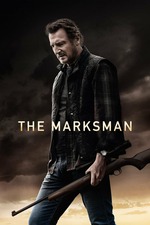 Instead of someone stealing Neeson's child like in Taken, he takes someone else's in The Marksman. The plot is fairly straightforward and involves Neeson driving a Mexican child across country to safety, with the cartel in hot pursuit.

The Neeson character is Jim Hanson. I legit kept thinking it was Jim Henson for majority of the film. Thought damn, this Muppet-origin story is rather bleak.

The Marksman often feels more like a road trip movie than it does action thriller. The story is fairly simple, albeit unbelievably tragic and somewhat depressing. The writing itself was hit and miss at times. The death of a particular main character was completely unnecessary, sad and really detracted from my enjoyment of the film.

There is probably not enough action or shootouts here for some. At times it also reminded me slightly of Tom Hanks' News of the World.

I'm not American, but I sensed some politics and themes being depicted that are hot topics in US life these days. Neeson was believable in his Hanson veteran character and had good chemistry with the kid. The score was really touching too.

It was all just a little too by-the-numbers for my liking though. Along with the death of a certain character and somewhat ambiguous ending, The Marksman just falls short of being a truly great example of the genre.

Still, a by-the-numbers Neeson action flick is better than most drivel these days.